Since it’s Thanksgiving Day and in my culture that means watching The Wizard of Oz, I thought I’d reference the wizard (the little man behind the curtain) while making a note of Google’s latest “innovation” — the breadcrumb URL replacement. Aaron over at SEOBook (a great source of free SEO tools by the way) notes that Google has strayed from its focus on relevance, and replaced user-friendly URLs with not-so-meaningful site breadcrumbs.

See some examples of Google breadcrumbs in the SERPs here.

I like that Mat Cutts responded by saying he’d pass along the word… suggesting that this innovation was not a quality factor, and perhaps had not received much internal debate at Google w/respect to the relevance argument. I think that makes sense, because I think this sort of Google innovation is anti-competitive, and part of a long term internal strategy. I told Aaron it was just another step towards eliminating the URL. I have long believed Google wants to eliminate domains and URLs for lots of reasons.

But right now on the eve of Thanksgiving, I want to remind everyone of the Great and Powerful Wizard that was actually a little man behind a curtain. 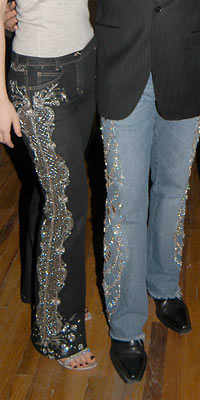 The breadcrumbs are the Wizardry..what Google wants everyone to watch. Something new! Another Google innovation! Look, helpful breadcrumbs! Naturally it is the professional SEO that remarks first how this innovation does not enhance the SERP, because properly optimized sites have helpful URLs. In the example Aaron provided, Google has replaced a very helpful, meaningful and rich URL with an much less relevant breadcrumb. But Google wants everyone to watch how those breadcrumbs help  average web sites, because Google doesn’t want you to look behind the curtain.

What’s behind the curtain? Google hates those who make a market around Google. They hate the companies that make tools that mine Google’s data. They hate the optimizers who scrape Google and they hate the rank checking tools that charge money to report on Google status and ranking. They hate domains that garner direct navigation traffic, because users can find shoes at shoes.com without asking Google where to buy shoes (and revealing that they are a consumer, tracked by numerous Google-owned marketing cookies, now poised to execute a commercial transaction).

This URL removal is an anti-competitive practice that seeks to hinder the efforts of companies that re-sell Google’s data, whether they be SEO research services or re-purposers (scrapers). It is the unique URL (and unique domain name) that enables everyone else to make money on the web. As long as every consumer has to go through Google to find a web page, Google has a chance to take a piece of the profits.

The urgency however comes from the competition.  As long as Google spends its efforts creating relevant collections of URLs and publishing them to the web for free, others will mine that resource and re-sell it into niche marketplaces for profits. And that harms Google in the long run (or so the thinking goes… you do need to think it through though).

Think about the businesses that have storeed Google results sets for years, and now offer research services. The businesses that offer SEO services, to help web sites rank higher than Google naturally ranks them. The reporting services… even the “let us manage your Local Business Center account” agencies are parasitic to Google’s business model of one website, once business owner, one Google customer.

This year Google renovated its SERPs to use 302 redirects through a Google redirector, instantly breaking many third party tools and disrupting all sorts of user-centric research tools. AJAX results sets also debuted, redefining the Google SERP as dynamic in a whole new way. And now, in this test, the URL is replaced in many of the results, swapped for breadcrumbs. It could have been anything, not just breadcrumbs. Anything but a direct URL, or a URL which could be parsed out.

Personally I like to see big successful companies that exert monopoloy-like power over public markets start putting their energy into defensive tactics. It’s energy not put into real innovation. It takes a wee bit of pressure off the upstarts that hope to some day challenge the monopoly. Like my lacrosse coach used to scream at me every day, whenever you’re relaxing (not  working out), your competitor is getting bigger.